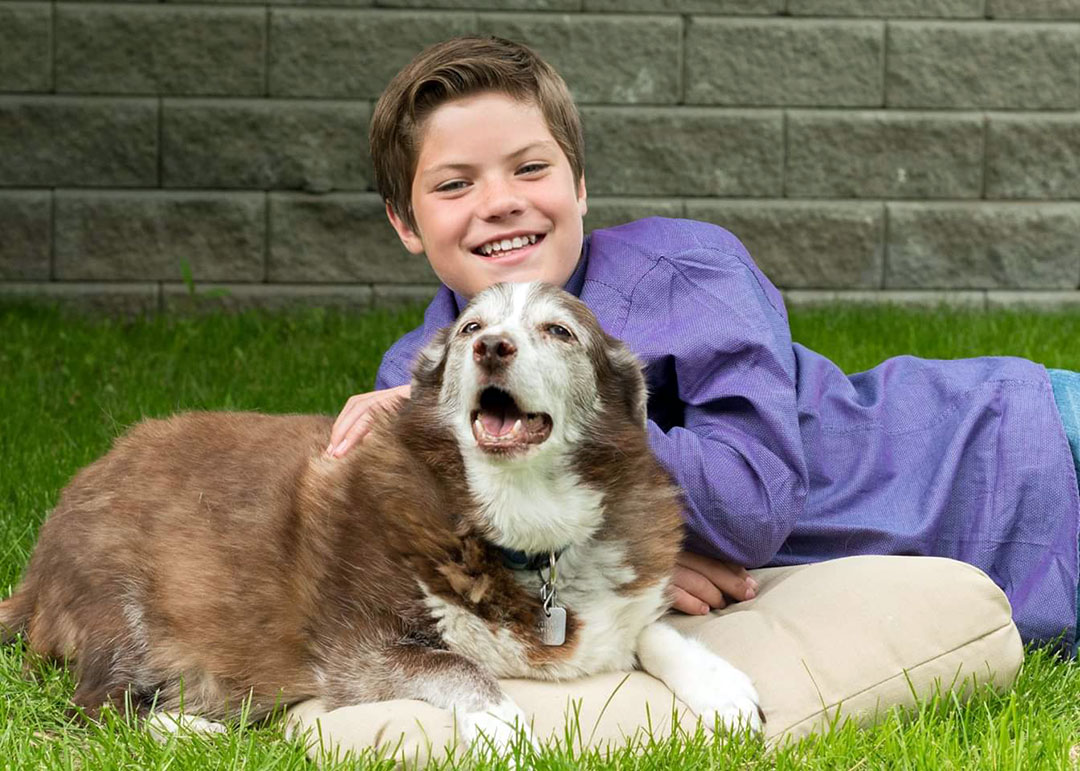 Posted at 12:11h in Pet Memorials by OPC Admin 0 Comments

Thirteen and a half years ago, a tiny little puppy came into our lives quite by accident. You see I had a friend over for coffee and her daughter had just been given a puppy from a batch of an unwanted litter. She brought her puppy over to show her mom and at the same time she said there was a sickly little puppy from the same litter that they were trying to find a home for. I asked to see the puppy because it shouldn’t be left in the car and in the house came Odin. He wandered over to me and promptly sat on my foot. She was right, he was not feeling well and he ended up throwing up. Odin right from when he was little could not handle car rides. He got carsick very quickly and so it was always difficult to bring him anywhere. It didn’t matter, I knew the moment I met him he was ours. The funny thing about that story is that Barry wanted a dog and had bugged me so many times to get one and I’d always said no. You can imagine his surprise when I phoned him and said ummm honey, we have a new puppy, can you pick up dog food?

We didn’t know Odin’s exact birthday, but he was about six weeks old when he came to us, chose us as his family so we always celebrated his birthday with the twins’ birthday’s. Picture that, a brand-new puppy, and two brand new babies and a 1 1/2 year old and a 9 year old. It seems insane but it always worked…Odin was always supposed to be with us. And for that reason, we named Odin after the God of War to give him a fighting chance in a busy house of boys.

I was always outnumbered…everyone was a Male, but I am blessed because my boys, all my boys love me. Odin has always been my dog without a doubt. He loves us all but whenever he needed anything, whenever dad kissed me, every single day he would wait till I got home, he is/was/will always be my puppychow.

We have so many great memories. So many moments that make us burst out laughing. And so many that make us cry. Now the house seems so quiet, so empty. I can’t hear his clicking nails or his jingling collar. I can’t smell his breath or feel his warm fur. I feel completely and utterly lost. I used to complain about him because he couldn’t be walked and he couldn’t travel but I wish he was here right now so I could snuggle him one more time and listen to him bark at me telling on the boys for not feeding him. I wish I could have kept him healthy.

The past few days he has not been himself but I just assumed he was tired and old. His hearing was going. His vision was going. He had arthritis in his legs. He was a little slower. His grey was really showing. He was drinking a lot of water. But he was still eating and saying hi to everyone and being Odiny. Today was different.

I only came downstairs for breakfast really quickly and then went back upstairs to do our taxes. I didn’t notice how Odin was behaving. It was Mattias who noticed Odin at the stairs, and he was breathing heavy and was weak. He told Barry so Barry came up to tell me and in the time it took Barry to come tell me, Odin had climbed up the stairs and collapsed on the landing. He was coming to tell me something was wrong…he needed me. This part makes me cry…makes me feel so awful that I hadn’t noticed sooner. Right away I got on the phone and contacted the vet emergency clinic and we made arrangements to bring him in. NOW. We packed up his pillow and I had to pick him up and carry him to the car as he had no strength. He let me put him in the car and instead of the usual panic and anxiety and car sickness he just lay there. That is how I knew. They took him right in and got him comfortable and examined him. That is when we were told that Odin had a tumour that ruptured and we had a choice to make…not really much of a choice at all. I wanted to be selfish and make Odin stay but I knew I needed to do what is right for him. He was in pain and he would hate being at the clinic with all the strange noises and smells and people. I wanted him to be with us and feel safe and loved. They brought him to us and we held him close and let him know we were there and loved him and he was a good boy and Odin drifted off to sleep and left us.

Odin was the best dog ever. He was so loyal to us and loved us all. Everyone who met him adored him. He always looked like he was smiling and his blue eyes were quite alarming. My boy, I will miss you until we meet again. RIP Odinhead. Look after M for us and finally enjoy the wind in your face and the sun on your fur.